So I might not be understanding the rules 100% surrounding speed and hitting mud, the screenshots below refers:
Player A is in the top set of lanes with its stats in red to the left. 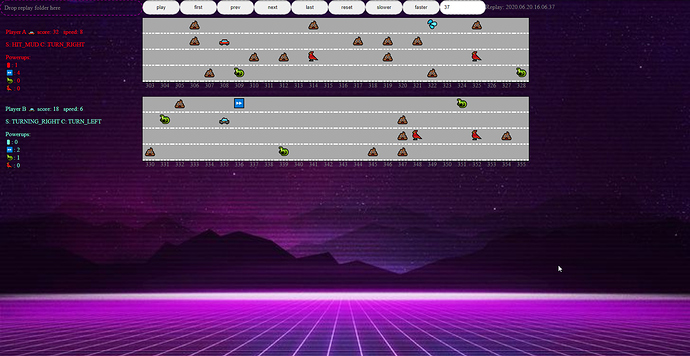 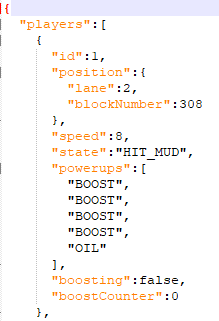 But the speed after hitting two mud is 3, another reduction in speed:

image1858×960 443 KB
GlobalState.json confirming the resultant speed of 3 and the tweet powerup picked up: 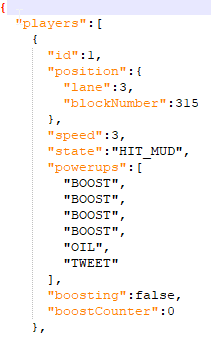 Anyone have a simple explanation of what is going on, what am I missing?

Thank you! I will need to make some changes then…

I must admit it is not explicitly clear from the rules that initial speed is off limits during (acc)(dec)elaration.

Not debating your point at all,

But one of the things that constitutes the bot building process is running some tests yourself to see how everything behaves. Myself, I dont run weird simulations, I dont take apart the test harness code, I just observe the matches I test and if you do that enough you generally puck up on certain behaviours.

The rules are there to guide but often us contestants need to test it ourselves.

I do not agree with you. The rules have to be clear.

How you approach the game does not constitute how everyone else should approach it.

The rules should be clear but sometimes it is not.

Two notes:
A) I believe most top 8 contestants follow this kind of approach, which is to criticize everything. I’m not saying everyone should but it really brings results.

B) To be honest, There was a few things that was not immediately clear judging rules to me. But speed state was not one of them. For me its fairly clear. But interpretations differ.

Luckily this is only round 2.
So we have a chance to correct our mistakes, I know I have a few to look at now.

Without taking sides, or opening cans of worms or anything - writing software without very frequent testing (blackbox and whitebox) almost always leads to sub optimal results.

In a perfect world,

However, in the world (or current timeline / simulation) we live in…

As a noob to this competition I have to say, I agree to some degree, it was a bit of a learning curve to get started. Yes, it was more obvious when I started to get my hands dirty.
The guys that have entered this competition a few times, obviously got running a bit quicker as they have played with the starter bots, thought about patterns that fit (or don’t), but more importantly, they knew to engage with the forum early on.

I found both the forum members and Entelect team was really helpful whenever a question was asked.

The combination of the rules and forum discussions bridged any of the gaps for me.

Yeah, the first time I competed, also completely missed the fact that a forum existed - only discovered it riiiight at the end.
Forum helps. A lot.

I remember my first time…

Think it took me like 1 - 2 weeks to get anything working, Just never worked with any of it.